Hay’s Wharf is located in the Pool of London based around a tidal creek. It was the oldest and most successful of all the general wharves.

From the 11th century, the site of Hay’s Wharf was the town house of the Abbot of Battle (Sussex). The house was called the Inn of Bataille and had its own private quay. Tooley Street was a route of pilgrimage to Bermondsey Abbey; crossing various fish-filled streams and fronted by a whole series of large church palaces, as well as the riverside town houses of the church dignitaries. Following the dissolution of the monasteries the area was turned into warehouses and in 1651 Alexander Hay took over the lease of a brew house (Goldings) by London Bridge and set up as a brewer and wharfinger. In 1710 the wharf was officially named Hay’s Wharf.

In the early eighteenth century the Admiralty leased some of the land as an Ordnance Depot and erected a shot tower for the manufacture of gun shot. The wharf was later used as a refuge for German Protestants escaping persecution. Francis Theodore Hay, the last Hay family proprietor, saw no future in wharfingering at London Bridge due to overcrowding and by 1796 most of the warehouses were leased by W. Humphrey & Son, established wharfingers to the west of London Bridge. 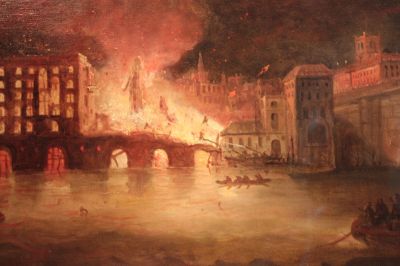 In 1840 the wharf came under the control of John Humphrey Junior, an Alderman for the City of London, Master of the Tallow Chandler’s Company, Lord Mayor of London in 1842, MP for Southwark 1832-52 and proprietor of Hay’s wharf from 1838 – 1862. In 1856 he commissioned William Cubitt to design and build new warehouse accommodation. He created a small inland dock so barges could gain access from the river, with a five storey warehouse on each side of the new dock. Business was good, until the Great Fire of Tooley Street in 1861. Described as ‘the greatest spectacle since the Great Fire of 1666’, it destroyed the “best warehouses in the kingdom”. The fire started at Cotton’s Wharf, destroying 11 acres of land. London Bridge railway station also caught fire in the blaze. Most of the wharves were rebuilt in the late 1800s as a result of Humphrey’s partnership with Smith and Magniac (whose company later became Jardine Matheson).

In 1867 the Hay’s Wharf company was founded, which acquired more wharves and warehouses: the Gun & Shot wharf was the only wharf between London Bridge and Tower Bridge that was not swallowed up by the Hay’s Wharf company. With the arrival of tea clippers from China and India, Hay’s Wharf became the leading handler of tea in the Port of London. Cottons Wharf was converted into the first commercial cold storage warehouse in Britain, handling shipments from Australia, New Zealand, Poland, Denmark and Holland. Bermondsey became known as the ‘larder of London’ because of its enormous trade in foodstuffs: mainly dairy and meat products and tea and coffee. Up to three-quarters of all London’s imported food passed through the company’s wharves. The company commissioned a new headquarters, Olaf House, and the first private telephone line in London was erected between the Tooley St wharf and its city office on the north bank of the river.

The wharves were heavily bombed during World War II but recovered: by 1960 the company handled 2 million tons of foodstuffs and had 11 cold and cool air stores, as well as many subsidiary companies providing ancillary services: lighterage, barge building and repair, bottling of wines and spirits, transport and shipping and forwarding. However, a bitter labour dispute with the dockers and a change in trading patterns and containerization, with docks at Tilbury and Felixstowe, affected all the London docks and associated industries. The Hay’s Wharf company set up cold storage in Dagenham in 1968 and announced the closure of the wharves in Bermondsey in 1969.

Hays Wharf as it is today.

St Martin’s Property Group, owned by the sovereign state wealth fund of Kuwait, acquired the property assets in the early 1980s. London Bridge Hospital took over the Chamberlain’s Wharf Building and St Olaf’s House. The dock was mostly filled in and paved over and a glass barrel vault installed to join the two warehouse buildings at roof level to create an atrium, for shops and offices, known as Hay’s Galleria. Warehouses were restored to include five interlinking buildings; Goldings, Counting, Shackleton, Tea Auction and Hay’s Lane. It is a Grade II listed structure.

This site uses Akismet to reduce spam. Learn how your comment data is processed.